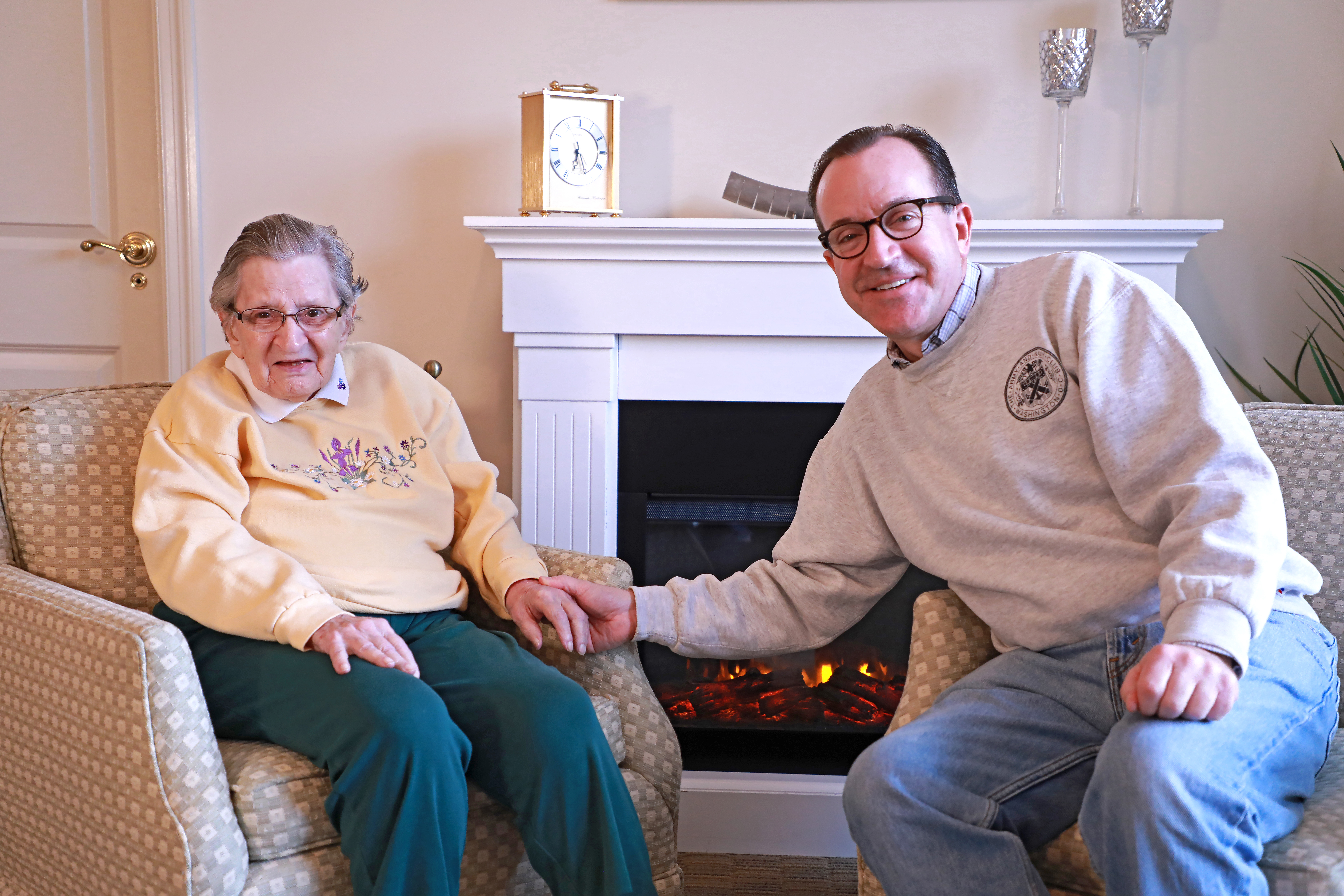 Joyce’s parents came to Washington, D.C. in 1925, and moved into an apartment on New York Avenue. Ironically, they moved to D.C. from New York. Joyce remembers her mother telling her that when they moved to D.C., it was in the middle of January and bitterly cold. She was apprehensive about the move, but they stayed in D.C. and made a very comfortable life in their new apartment. A few years after the move, Joyce was born at Sibley Memorial Hospital in August of 1927, roughly one year after Sibley was built.

David, a history aficionado, was thrilled with his discovery and talked to his parents about Sibley and his mother’s upbringing in D.C. He found it fascinating that Sibley has been such a long-standing institution in the community and his mother literally grew up with the hospital. “It’s incredible to see how the hospital has changed over the years, but I appreciate that it’s still focused on family and community,” says David.

David was born and raised in Nebraska after his father accepted a professorship at the University of Nebraska, and until he later moved to D.C., he only experienced his family’s D.C. roots through stories and photos. Eventually, the Trebing family made their way back to the nation’s capital to settle into the place Joyce called home.

After leaving Nebraska and before moving back to D.C., Joyce began suffering from signs of dementia and was living in a senior living community in Michigan. David wasn’t a fan of the hospital being so far away from the senior living community. With Joyce’s dementia, the trip in the ambulance often confused and frightened her, and her family usually wasn’t notified until she already arrived at the hospital. Upon moving back to D.C., she needed a place that could provide her the level of care that she needed. David and his brother began looking for communities for his mother when they came across Grand Oaks Assisted Living Community.

They knew they wanted a place with a hospital close by, one that would provide the level of care and attention needed for their mother to feel comfortable, and they wanted a place that was close to where they were living in D.C. so they could visit frequently. It didn’t take long for them to realize Grand Oaks was a perfect fit for their mother, which was only a few blocks from David’s front door.

When David found out that Grand Oaks was literally connected to Sibley Memorial Hospital by way of an underground tunnel, he immediately had a smile on his face. “How perfect is it that the place we thought stood out from the rest happened to be connected to the hospital my mother grew up with,” said David.

“When we started this search, we wondered why there aren’t communities physically connected to a hospital,” said David. “Grand Oaks was the only one we found.” The Trebing family visited Grand Oaks twice and knew it was the place for mom. It wasn’t long after the move-in that the amenity that they liked most was put to the test.

One early Sunday morning, Joyce needed to go to the hospital. The staff at Grand Oaks notified the family and transferred Joyce to Sibley through the underground tunnel. She made it to the hospital and was in her room before her family got to her. It’s important to note that they only live a few blocks from Sibley. This was the care that the Trebing family desperately desired. “The close proximity of Sibley to Grand Oaks is extremely comforting knowing that when you need the care, it’s there and it’s a lifesaver, literally,” said David.

Joyce has been living at Grand Oaks for a little over a year now, and the Trebing family has noticed Joyce’s improved quality of life and her perpetual happy mood. They attribute her well-being to the high-quality, hands-on care at Grand Oaks. “With mom being at Grand Oaks, it’s like she came home,” said David. “She was born at Sibley, raised near Sibley, and now, the next chapter of her life includes Sibley. This hospital has been a part of her life since day one.”

Today, Joyce is spending the next chapter of her life where it all began, and that sentiment isn’t lost on her. “Dementia has presented some real issues for mom, but she always remembers that she was born at Sibley and that she grew up not too far from the hospital,” said David. Her short-term memory may be affected, but Joyce will always know that she came home.

Ready to Schedule a Visit?

Contact us to tour your new home at Grand Oaks.

Schedule a tour and discover what aging well means at Grand Oaks.